Breaking news – a catalogue of disasters! And we’re still waiting for the top coat to arrive, whilst the painters are almost done faring the deck and boxes. The cockpit box is taking shape too, whilst the varnishers are applying polyurethane in their make-shift, dust-free workshop made of clingfilm.

And now for something completely different…

We’re not even laying a teak deck and yet it feels like we’ve just bought another tree. This time it’s for the cockpit seating. Under Un’s watchful eye, Pong slices the planks to Un’s exact measurements.

Cutting the teak in the yard on the saw mill

Pong is a master craftsman and his eye for spotting a decent bit of teak over an rubbish one is excellent. Here are the planks shortly after cutting them.

A lovely bit of teak

Up in the cockpit he starts to size up each plank.

Pong is watched by his grandson, keeping it in the family.

We’ve opted to take the teak up to the edges this time. Last time the cockpit was divided up into three sections with a gap around all edges, but this option should improve cleanliness (no dirt getting trapped in the gaps) and should look better too.

Teak taken to the edges.

We’ve opted for 12mm planks. Esper originally had 15mm laid and it lasted 25 years, so 12mm should see us into retirement.

The cockpit box is starting to take shape. You can see in this photograph the detail of the honeycomb, which has a layer of epoxied fibreglass laid over the top.

Cockpit box made of honeycomb

This photograph gives you a good idea of what the box will look like once complete. Of course it has to go through the same procedure of filling faring as the rear deck boxes, and all before the paint team start working their magic.

Looking forward towards the cockpit box

The boxes were glassed in last week and they are rock solid. Lek then spent the first part of the week filling in the gaps, lumps and bumps with the glass balloon-filled epoxy, making it look like a badly iced cake. 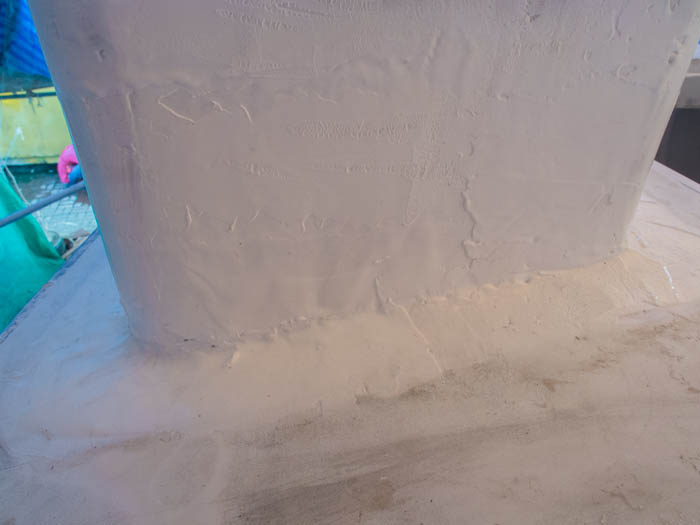 Filled with glass balloons and epoxy

Unfortunately I forgot to take a photograph of the boxes after their coat of high-build, which is a white paint filler. With that on top you get a real feel for what the rear of the boat will look like. There’s a great shot of them in the video clip.

Patching up the fuel tank

We’ve been contending with a tiny fuel leak since we left India. At the time the only epoxy I had was cheap indian stuff that wasn’t up to the job of fixing the leak. The leak itself was probably caused by my own stupidity, using a polyurethane epoxy that probably melted the tanks. This weeks the tanks were rubbed back and we’ve started to glass fibre around the bases. Eventually we’ll paint them.

The varnishers are now on Esper full time. They’ve taken a corner of the tent and put up clingfilm to create a makeshift workshop. It means they can crack on varnishing the cupboard doors without fear of getting dust on them.

The varnishers in their make-shift workshop

The paint is stuck in customs but should be with us next week, so we could be seeing some top coat madness soon! In the meantime those varnishers will be cracking on with the floor, whilst Pong teaks the cockpit.