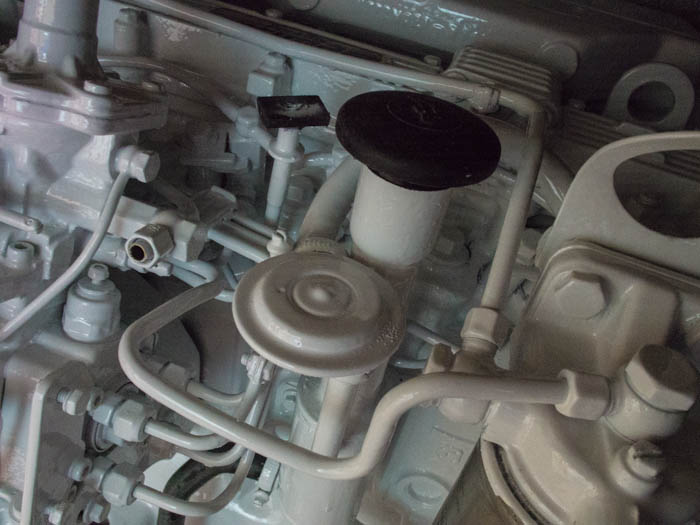 We’re into week 12 and things are starting to take shape. For the first time I walked into the saloon and got a glimpse of what it’s all going to look like.

It’s a short one this week. Check out the progress being made on Esper and come and join us for a farewell drink with Thea.

I’d always wondered what special technique carpenters use to bend wood. I thought it involved steam and bits of string but this week I discovered the trick: two cans of oil, a load of bricks and some clingfilm.

A new teak toe rail cut and being bent to shape

Having selected a nice piece of teak from the stores, Pong cut the plank into strips according the width and height we’d specified. Liz and I spent a lot of time designing our toe-rail. We’re moving away from a complete toe-rail, front to back, and instead cutting it short at the pushpit and pulpit. We’re also planning to break it at each stanchion in order to improve the deck’s drainage. 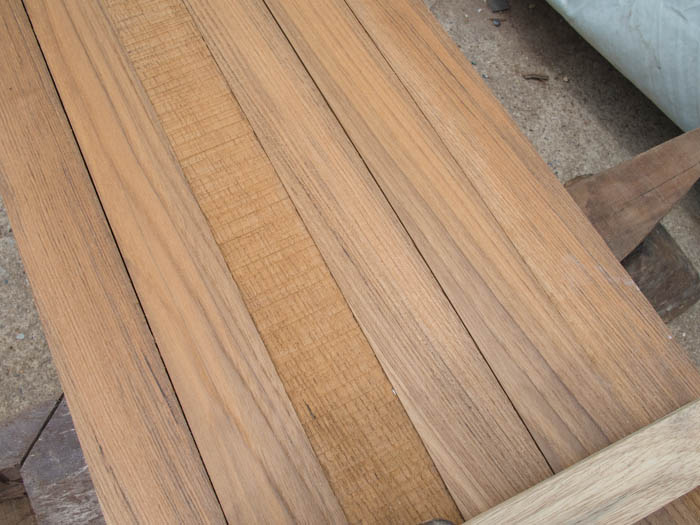 Mey had spent considerable time scraping away at the old paint on the engine in preparation for her new coat. Finally, Moo and Lek took to her with acetone before laying a coat of primer followed by two coats of Awlgrip. 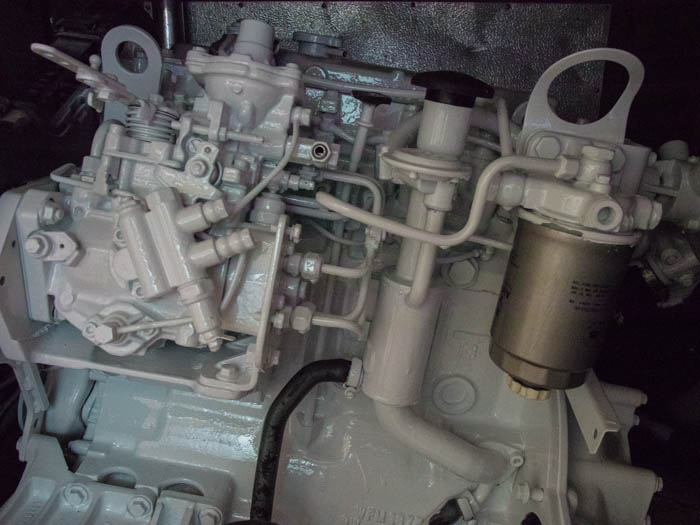 As mentioned previously we’ve decided to go for a teak floor and Pong has been cracking on with laying it over the top of the old sole boards. Now that he’s taken it up to the edges in the saloon, you can start to get a feel for the eventual look we’re after. 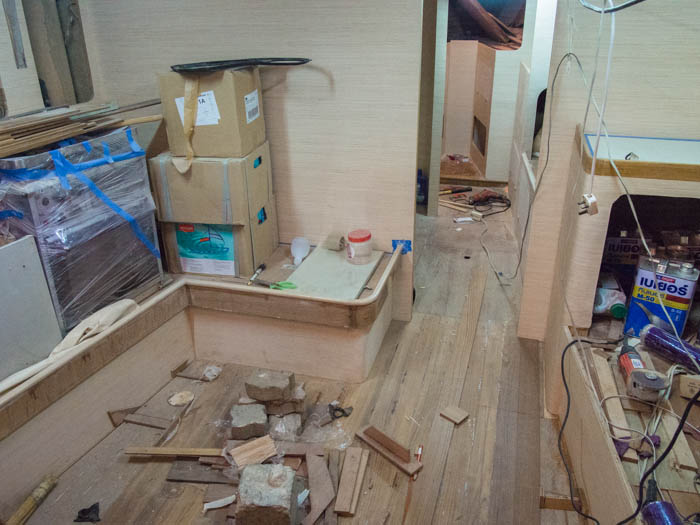 Our solid teak floor is starting to take shape

Of course the teak at the moment is covered in epoxy and dirt, but with a sand and a few coats of polyurethane it’s going to look pretty spectacular. 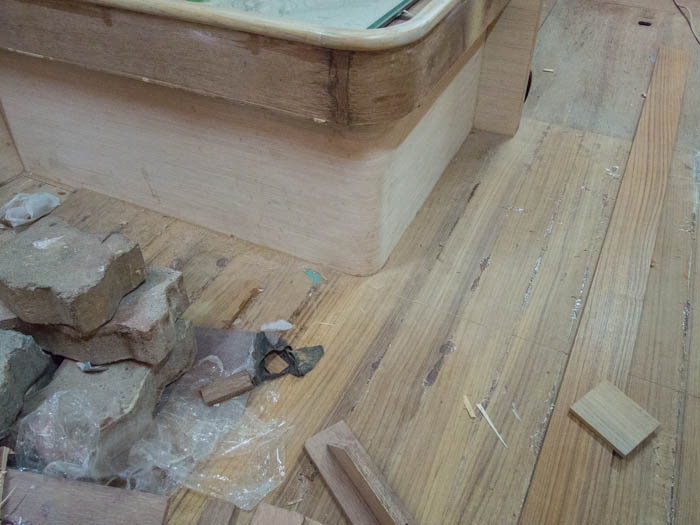 The teak has been taken right up to the edges, which conveniently covers the old ash trim

We’ve seen an increase in the number of painters working on our deck. They’re at the point now where they’ve done their first faring and have painted the deck white. Next week they’ll spray it black and fare it back again, with remaining black bits highlighting parts of the deck to be filled some more. 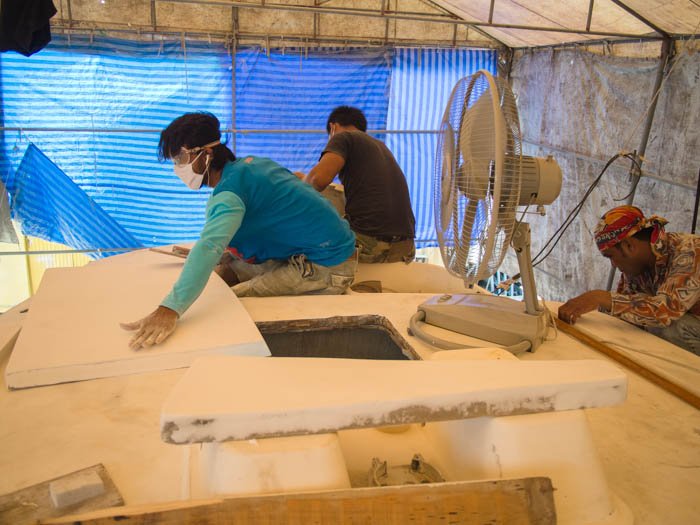 Unfortunately four patches of deck have delaminated. They’re random and in all but one area the deck underneath is bone dry. We cut away at those pieces and 6 layers of biaxial fibreglass have been epoxied in place, ready to be fared along with the rest of the deck. Better to discover these areas now than after the respray! 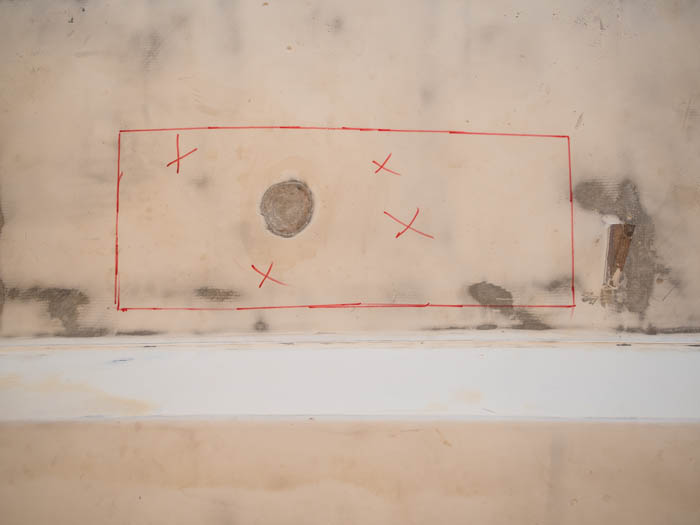 Stuart, who owns a Rival named “Nomad” had come to PSS to get some minor osmosis treatment done. We got to know Stuart quite well and enjoyed a rum and a chat with him after work. Turns out he’s good friends with Sam Coles, he of Ramprasad fame who I sailed with back in 2003! 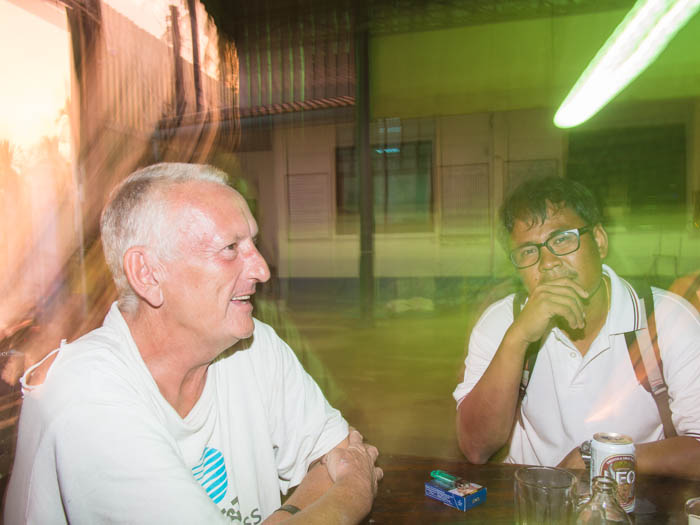 Stuart, who also emplyed Un to project manage his work

After a dark Friday and torrential rains the skies cleared and on Saturday morning, spring high water, Stuart and ‘Nomad’ were launched and we waved goodbye to the seventh boat to haul out and drop back in since we’ve been in the yard!

Thea, the 90ft motor boat being rebuilt by Aussie owners Jamie and Julie, will be launching on Monday. To thank all the workers who have contributed to her refit, a party was thrown. 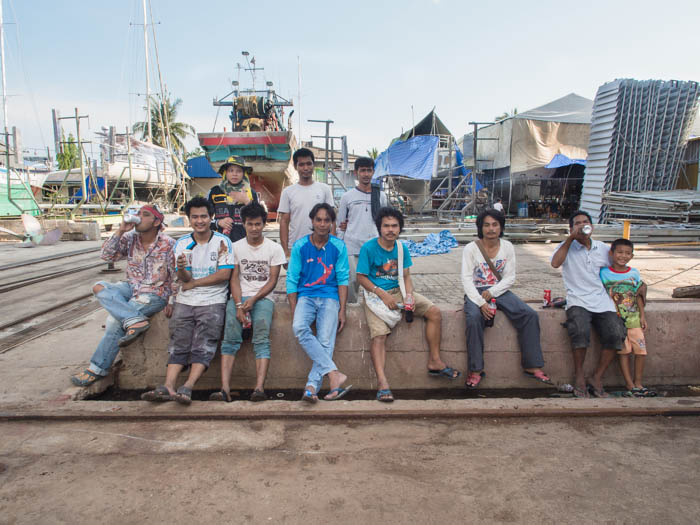 Team Esper – most of whom also worked on Thea

Free beer and gorgeous BBQ’d seafood is guaranteed to maintain those Thai smiles and it seems half the village turned up to join in the celebrations. After a short speech, translated by Un, Jamie and Julie ushered all the workers up onto Thea’s decks for a photoshoot.

Just some of the workers aboard Thea

I think everyone was delighted to honour a special guest at Thea’s party. Un and Moo’s father, who has been working at the yard for over 20 years, hasn’t been well lately but he put in an appearance at the party. He was overwhelmed with hugs, handshakes and well wishes from staff and boat owners alike. 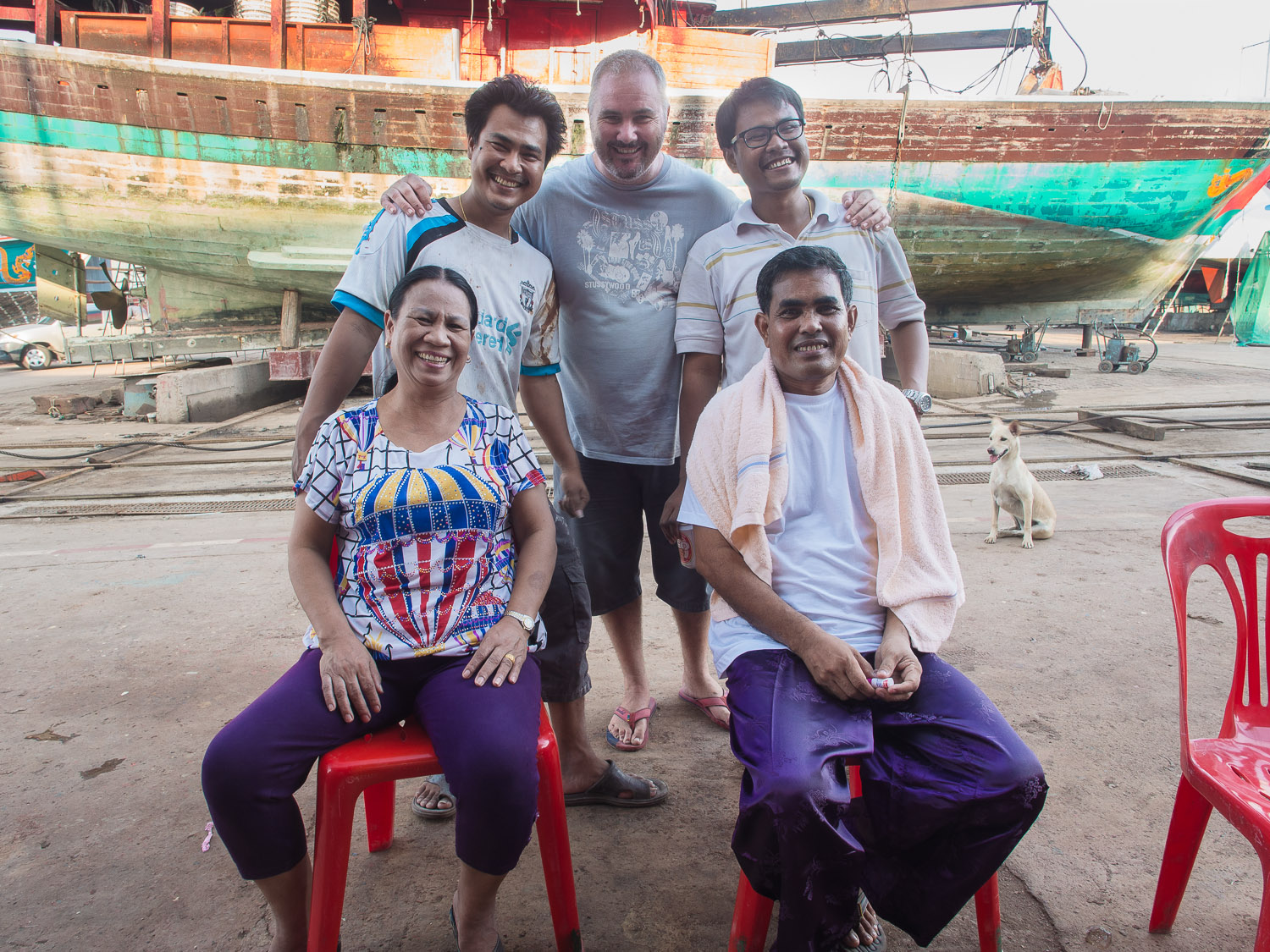 Jamie poses with Moo, Un and their parents

I think it’s going to be all about the painters again next week. Hopefully by the end of it they’ll have completely smoothed off the deck, filling all bumps, dents and patches, ready for the undercoat. At the same time some filling of the edges will be required before the new tow rail is fitted. With the deck fittings, engine and cupboards all shiny and new, we’re going to have to think hard about new jobs for Mey to undertake!