Would you believe it? More to the point, would we have believed it? One year in the boatyard calls for a party. Plus there’s some much-requested boat updates in the video clip, which also covers a rather strange phenomenon in the yard.

The biggest clip to date. Three weeks of boat updates, an education in Thai fishing aboard a fishing boat, Portabote improvements, stainless work, and a leaving party…

One Year In The Yard

We’ve agreed on a launch date: six months ago. No, but seriously, the next spring high water will be around the 20th Feb, so this is the date we are working towards. Unfortunately our electrician doesn’t appear to be working to the same date and our replacement dripless seal hasn’t arrived, so the pressure is on.

Since our last update we’ve ticked off a whole load of jobs. There’s too many to mention here but they include all the stainless work, most of the electrics, all of the carpentry (except we keep getting Ton back to do the odd bits here and there). Check out the video clip to see how much has been done.

Also in the video clip is a breakdown of two key improvements to our Portabote. The first was the replacement of the transom hinge after the original plastic one split. The second addition are four lifting brackets so we can hoist the Portbote via our new davits.

Although we’ve put a date in the log for our departure there is still plenty to do.

– dripless seal – needed replacing after it was found the rotor was 38mm and not 1.5″ (difference of 099999999999994mm)
– engine charging system – alternator is only putting out 2.5v, though this was to be expected since it needs exciting before putting out 14.5v. The Sterling alternator to battery charger
– navigation – from AIS to the autopilot, there’s still quite a bit to sort out
– varnishing – a few items left for their top coats
– foresail – we’ve put up three of the four sails but the foresail furling line needs rethreading. This is a b@$tard of a job but it won’t stop us from launching
– get everything on the boat – still a lot of items in the lock-up that should be on the boat by now. Difficult since the interior is still not complete

Our stainless welder, Yoong, has left PSS! Shock, horror! Fortunately all our stainless was completed the day before he left the yard 😉 We’re happy for Yoong but sad to see him go. When we first arrived in the yard we nick-named him Mr Smiley as he always had a jolly demeanor about him. We invited him and some of our workers to our own celebrations, where we all drank a lot of beer. 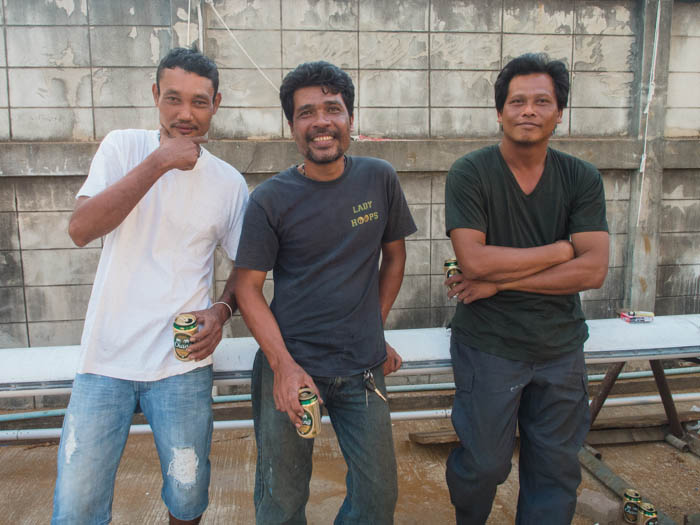 Yoong, centre, on his last day

Previous bets are off. We’re not going in the water until the dripless seal turns up and our alternator is charging our batteries.

5 Comments on “Esper Refit 50-52 – one year in the yard! Portabote improvements; interior carpentry”

What are you up to at sundown We're sipping a cool