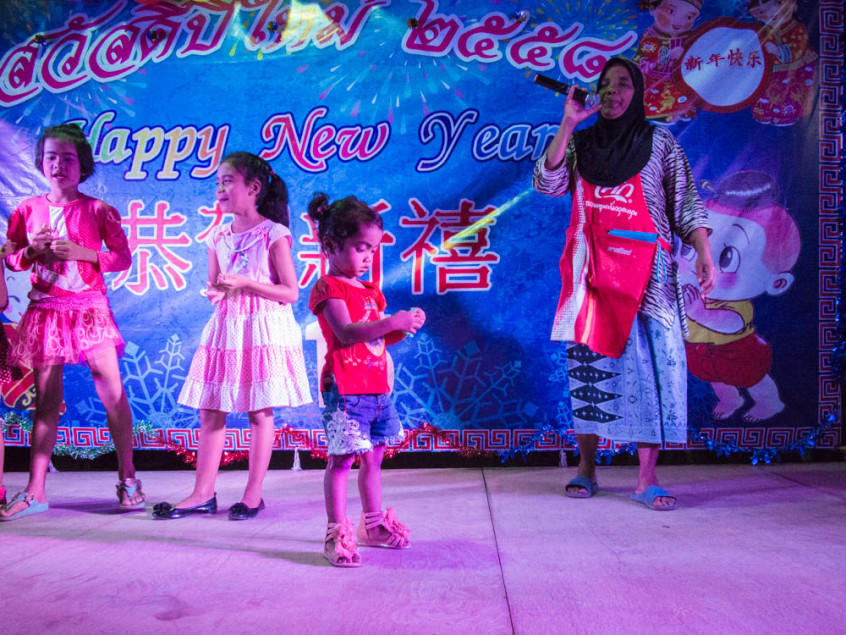 2015 and we’re close to hitting a year in the yard. For those of you asking why we don’t just leave and finish the jobs at anchor, Liz has her answer in this week’s video clip.

With three weeks to catch up on this week’s clip is a chaotic wall of sound as we hit the karaoke, take in fireworks, cruise round Satun in a sidecar, and get some more carpentry work done.

Before the more mundane boat updates, it’s worth posting up a few photographs from the recent festivities in and around Chebilang. These included New Year’s Eve in Satun, and the annual PSS New year party with games, entertainment and karaoke for the local workers and yachties alike. Someone doesn’t want to dance Liz leads the way with a rendition of something vaguely recognisable The ‘older’ kids bust some moves Local girls not so impressed with our karaoke Bobby takes Brendon out for a spin

First thing we did in the new year was transfer all our belongings from the lock-up at the other end of the yard to a container right next to Esper. With a/c and a light Liz has spent the last week going through all our goods in comfort. Ton has been fitting the catches on our rather unique saloon table. If you remember the table is two-in-one, with a small coffee table under the larger saloon table. The top table comes off and can be stowed in the cabin against the wall. The fittings were made in PSS. Ton fixes the table brackets to the wall

After fitting our veneer we decided that we needed some trim around the areas that will receive heavy traffic, specifically the shelves. We struggled to come up with a wood that would match our white vine interior so we opted to go with pine. Having seen the trim already cut, routed and fitted we have to agree with Ton’s decision. They look great. A couple of weeks ago Young welded in place a new outboard motor holder directly onto the port pushpit. We had one piece of teak ready to be used but it had a split in it, so Tui, who is back working on Esper, fashioned a new block ready for installation.

After installing a new aft shower, new taps in both the heads and the galley, and removing other pipe work, it was time to install the sinks and test the plumbing. We only found one leak and that was due to a faulty fitting, so the plumbing is now complete.

Unfortunately the sink retaining bolts had corroded in storage so we had to get Yoong to make up some more. More frustratingly was that Liz then found some extra ones in good condition, so we didn’t need all five fittings in the end. Still, we now have some spares if anyone needs them 😉

The galley sink has been polished and all that’s left is to silicone it in place.

Talking of silicone, Tui spent most of the week siliconing all the laminate inside the cupboards. This will help keep the dirt out from the joins. With all cupboards now laminated we’re close to start putting stuff back on the boat.