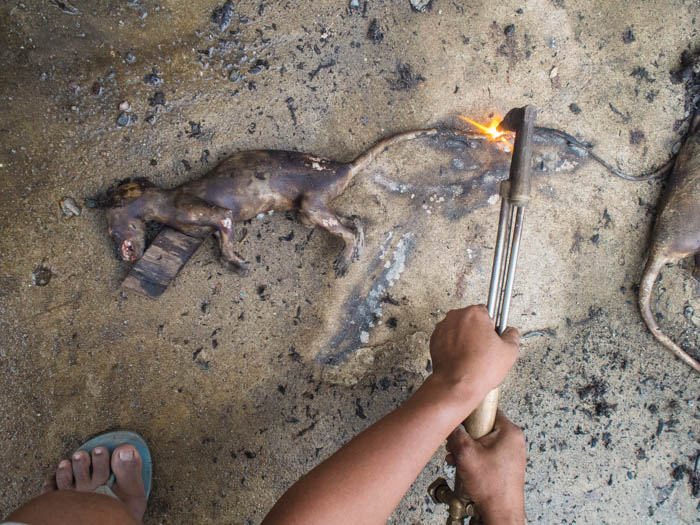 The good news is Liz has returned to the boatyard. Hoorah! Unfortunately as she recovers from jet-lag I’ve barely had time to do any recording or take photographs, so I’ve combined the last two weeks.

Despite it being only a short video, I did manage to capture one of the yard worker appearing to weld rodents. You have to watch the video to see what I mean…

Whilst not strictly boat refit news, our cat Millie is still one of Esper’s crew so those who know her may be interested to know that she contracted hepatitis recently. She went off her food, stopped drinking, lost half her body weight and hid under the bed. Not even Dreamies would move her. Something was wrong so I took her in to our local vet’s whereupon she was immediately put on a drip. We think she may have been scratched by another cat carrying the disease (she had a cut on her head which may have been the cause) and went down hill rapidly. She’s been recuperating for the last week and we hope to have her back on Wednesday. We’re happy to report that on our last visit yesterday Millie showed signs of improving. She’s still jaundiced and not eating solids, but she’s no longer vomiting and was more animated than she has been for weeks. Fingers crossed.

Bow roller for our Rocna

One of the many pieces of stainless we’re getting fabricated is a bow-roller, designed specifically for our Rocna anchor. We’re using the same deck fitting and the same bronze rollers, which have been machined down to fit a new system that should have us weighing anchor without any more problems. The problem with the Rocna (and other modern anchor designs) is that the shank is straight. Angles are not as curved so the angle that the anchor was being hauled up over the old roller was almost 90 degrees to the deck. It’s a common problem and we hope that the design you see above should rectify the issue. I really dislike my windlass. I find the through-hull design a PITA, specifically because it encourages water ingress and eventually clogs up the motor. To service it you have to remove the seal and circlips, and the only way to get them off is to destroy them. Anyway, offering it up and fixing it to it’s new teak base was a job I’d successfully avoided undertaking, but I’m happy to say it’s on. Dunno if it works but it’s on 😉 The little village of Chebiland has a market on Thursdays. Behan of s/y Totem and I wandered down, tooks some pics and bought some veg. One thing you’ll notice is the talc that the locals wear as a sunblock.

Remember I mentioned our upholstery and how we were supposed to have it by now? No chance. It’s getting beyond a joke as each week we are promised our completed cushions that the upholsterer has had for nine months. Remind me to tell Jia not to promote his services to other yacht-owners. Some people aren’t as patient as me.