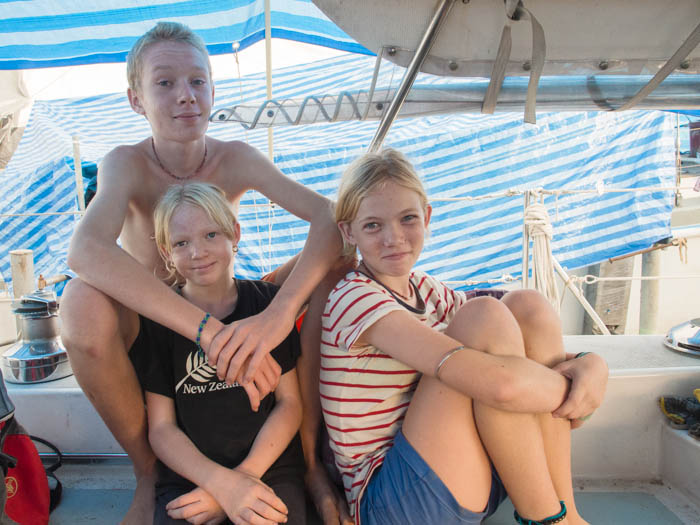 This week’s video clip is a cracking one. The younger crew from s/y Totem spend a week project managing Esper’s refit, discuss life in the boatyard and adopt, albeit temporarily, three lost kittens.

A great clip this week featuring Niall, Mairen, and Siobhan of s/y Totem.

Behan is an active blogger whose cruising-with-kids website has a large following around the world. You can read more about the Totem crew here. The Totem crew pose with our varnisher, Dang More young people, this time local children on their way to the market

Dang spent most of this week preparing and painting the cabin with its final coats of polyurethane, and it looks good. He’s put enough layers on that the grain has now gone and the veneer feels smooth to the touch, which helps strengthen and protect the surface. Un and Ton at work down below

I’d mentioned in a recent email update that I’ve taken to sitting in the back of a pick-up, drinking Thai whisky. It seems this is a regular occurrence and, if I leave the yard after dark, I hear my name shouted across the car-park where I find some of the workers hanging out drinking by their pick-ups. Sometimes they’re listening to music but most of the time they’re just laughing at my efforts to learn Thai. Without a pen and paper it’s pretty pathetic. Sitting in the back of a pick-up, talking rubbish

Although not strictly related to the refit project, I thought I’d mention the PSS BBQs that happen from time to time. This Saturday’s was the best to date when we were entertained by Un, Jia, Graham of Lorrigray II and Andrew of Utopia II on guitars and the rest of us singing drunkenly out of tune (apart from Lorraine of Lorrigray II who held it together). Jia and Graham of Lorrigray II Andrew and Karen of Utopia II and the crew from Totem

For some people, however, it all got a bit too much. Damn Aussies.

With friends visiting for Christmas we now have deadlines, so the pace of work should increase. Possibly.

11 Comments on “Esper Refit 39 – Totem crew take over; life in the boatyard”

Esper Refit 39 - Totem crew take over; life in the boatyard - followtheboat
GET EARLY ACCESS!Be The FIRST To Know About FTB