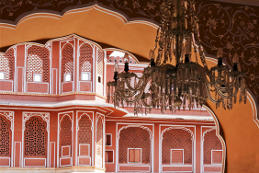 Rajasthan is one of the poorest states in India and the cooler temperatures of the desert plains accentuates the starkness of poverty. In contrast its capital Jaipur is rich with energy, commerce and culture, and goes down as one of my favourite Indian cities.

Known as the Pink City, it is a place where monkeys thrive on the props of the human dwellers in the back streets. Stone masons, fabric vendors, silver merchants and the glorious palaces of the Singh dynasty all provide a climbing frame for these scavengers. 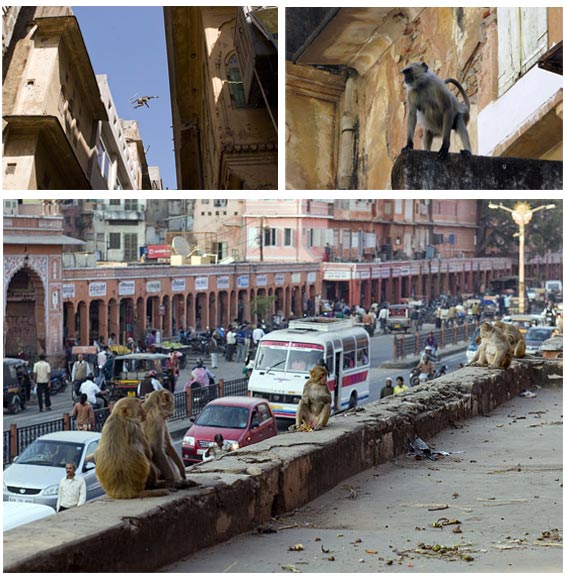 When the Prince of Wales visited the city in the nineteenth century, it was painted pink by Maharajah Ram Singh to mimic the red sandstone buildings of the great Mughal cities. 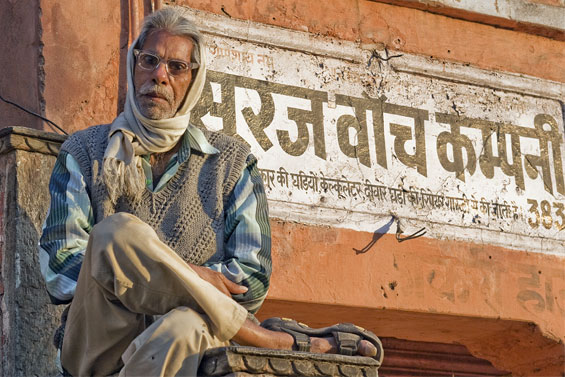 The crenellated fort walls that run around the old town turn a rich peach in the setting sun.

The night turns crisp and autumnal in February

At sundown the local population wrap themselves in layers – scarves, pashminas or rags,  depending on their situation – as the night turns crisp and autumnal in February. 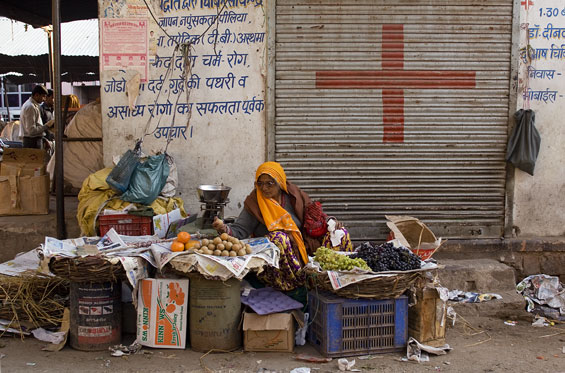 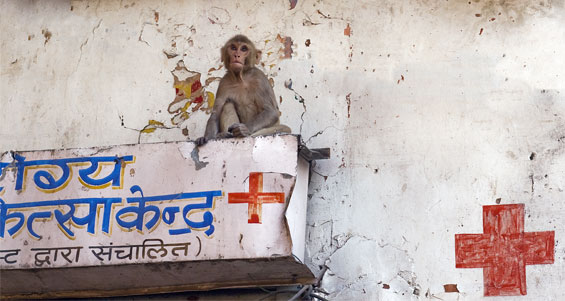 I don't need a scarf

It was on one of these evenings that Liz and I were delivered to our hotel, the Arya Niwas, one of the best hotels I have stayed in. 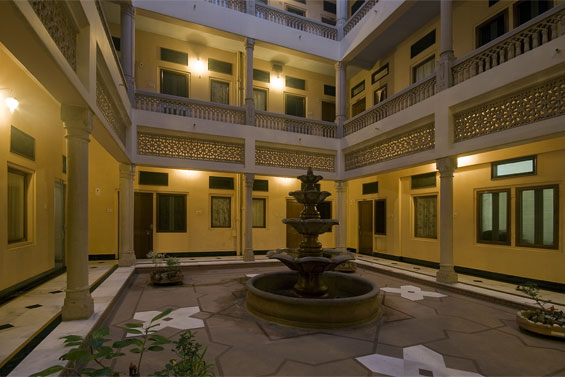 It is a four-story, marble-floored havelli (nobleman’s house) built round a number of open courtyards and water-features.

The lawn, adorned with many hundreds of colourful flowers in haphazard pots, is the perfect spot to eat breakfast and dinner. 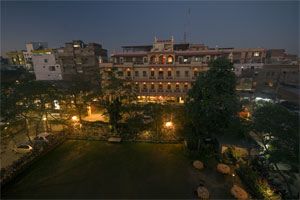 View of hotel's garden from roof

Tasteful small tables supporting bowls of local flowers or fancy lights are placed outside each room in the corridors. Spiritual hedge monkeys would probably claim it has chi. The lawn, adorned with many hundreds of colourful flowers in haphazard pots, is the perfect spot to eat breakfast and dinner. After a day’s travel, we slept well in the comfortable bed of our tastefully appointed room, which featured hand-painted Rajasthani floral murals round the door frames and ceiling fan. (Click here for Liz’s review of the hotel on Trip Advisor.)

Sauntering The Dusty Back Streets

After a hearty start of varka, coffee and toast we set off at ten, laughing at the late-risers who were populating the garden for breakfast. Little were we to understand the irony of our guffaws, as later that evening we returned to our retreat, exhausted and aching after nine hours of solid walking. 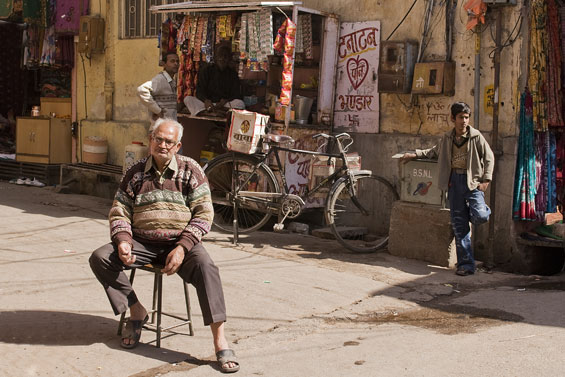 Our saunter took us towards the old town. Avoiding the bus and cycle rickshaw option we dusted off our walking boots to get the calf muscles working. The residential and commercial areas of these over-populated lanes in the old town turned out to be one of our greatest pleasures in Jaipur. Cool, dark and tight, the straight-lined roads were easy to navigate but difficult to walk through quickly; there was so much to excite the senses. 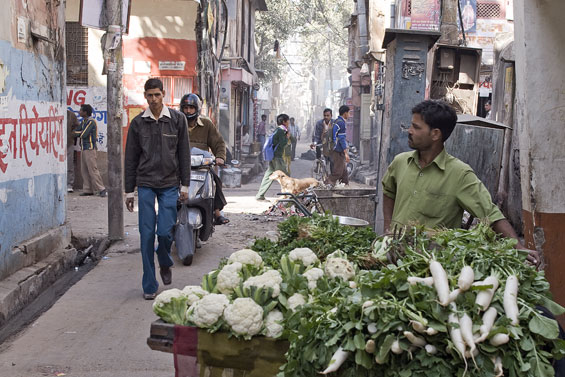 The conditions in which the locals live are poorer and more squalid than Cochin. There were some pretty sad scenes in those back streets but, like most places in India, the people were just getting on with things. They were more astute here when it came to tourism, but so far I have found if you point a camera at an Indian they rarely object. 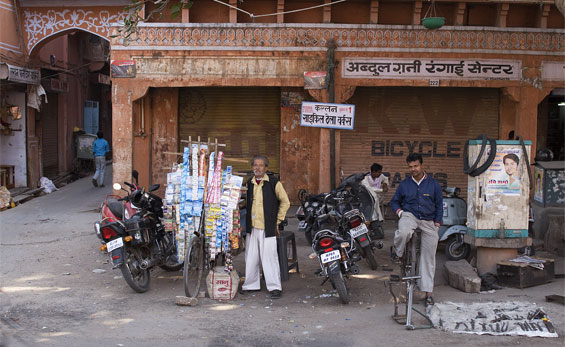 When he built the city in 1727, Maharajah Sawai Jai Singh II, ruler of Amber, had the foresight to line many of the roads with trees that shelter the residents from the midday sun. On closer inspection, many of them contained not just birds but kites too, and I don’t mean the feathered kind. A common sight in Jaipur is children on roofs, unravelling bits of string and flying their toy kites in the light afternoon breeze.

Trees and telegraph cables across the city had stolen a kite or two, adding to the decoration. They looked liked diamonds in the sky (I wonder where Lucy was?) when the brightly coloured material caught the rays of a late afternoon sun. 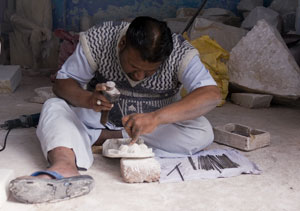 We meandered down a street south of Chandpol Bazaar Road, which appeared to be home to the stone masons. Men of all ages sat crossed-legged, concentrating on cutting, drilling, refining and sanding various bits of stone with electric drills.

They worked in tiny low-ceiling shop fronts, often with no or poor light.

They worked in tiny low-ceiling shop fronts, often with no or poor light. Down the tight, dingy alley, in amongst buildings six stories high, it created an environment so dusty my eyes were itching and throat gasping for water after just ten minutes. Despite the fascinating environment, surely one has to wonder about the health and life expectation of these poor men? 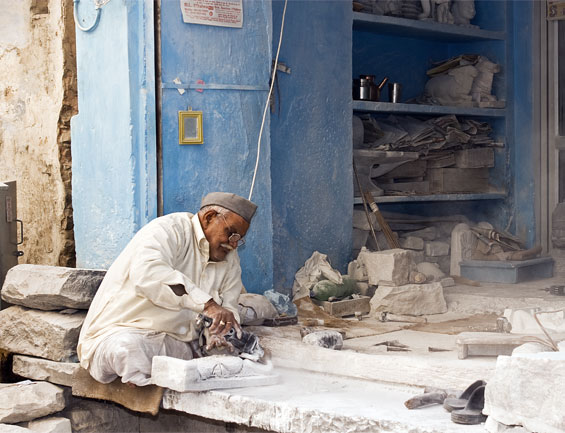 Further along the same street, away from the confusion of the stone mason studios, an old man was propped up on a stone platform selling nothing in particular: small packets of biscuits, drinks and crisps. 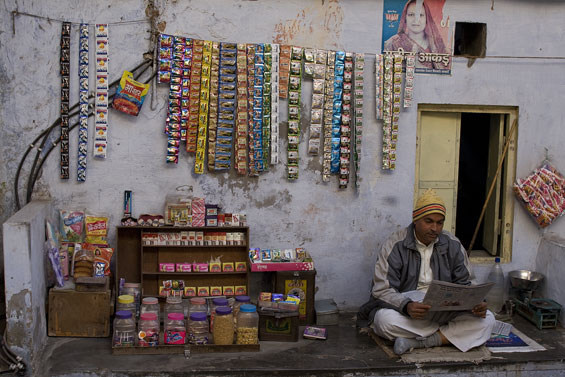 Behind him, however, was a small window and from it came a repetitive clunking noise. We hopped up on the platform and craned our necks to see what was causing this strange rhythm. It was a hand-operated press and behind the glassless window were two men in a tiny room moving in time to the sound of the machine. They waved at us to come in, which meant sneaking through a small door in the wall to get to their tiny workroom.

In Hindi – and mime – the operators explained how the machine worked. The man on the left operated a foot pedal, like a Singer sewing machine, which powered a large gear, thus operating the press. A large round disk, laced with blue ink, came down, then a wooden plate with blank paper on it moved up to meet it. After pressing the two together the man to the right of the machine grabbed the sheet of paper, removed it and placed a new sheet in, and so the process continued. All day.

The men were proud of their laborious job and seemed pleased that we had taken an interest. They took a few minutes to show us the room next door — another tiny cupboard with another press, and kindly gave us the sheet of paper they were printing as a keep-sake. It was in Hindi, of course, and I’ve no idea what it said. Perhaps I should have rung the telephone number on it and asked. Towards the end of the road we came across carpenters. It wasn’t so much a timber yard, more a shed with some rough planks stacked up against it. Wood shavings and sawdust lay all over the floor, having soaked up the mud to create a soft carpet upon which three men worked. Two young lads were planing sheets of light-coloured wood, whilst a third sat crouched in front of them, doing something to the finished timber with a small hammer. 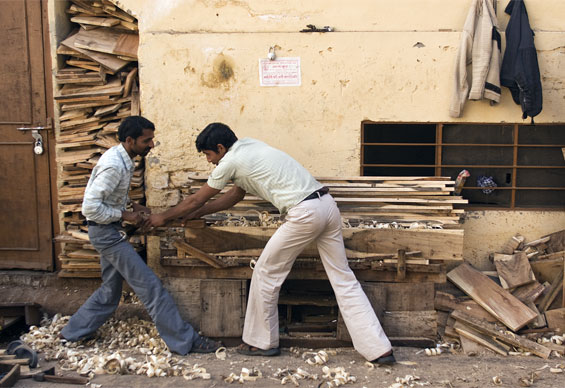 Above them, set back behind a pile of rubble, in a tiny shed just big enough for a crouching person, was an artisan carving sandal wood into beautiful pieces of tourist tat. I was tempted to buy his Ganesh-carved-into-a-little-book ornament, but Liz and I laughed when he said he wanted 5,000 rupees for it (£80). They cost less than half that in tourist-swamped Fort Cochin, and Liz reminded me that Jaipurians are known to drive a hard bargain. Hard bargain? That’s just taking the piss! 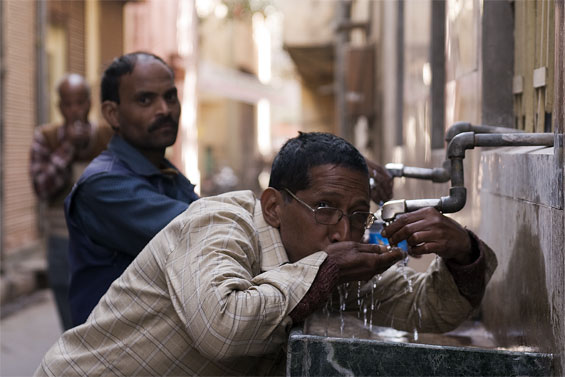 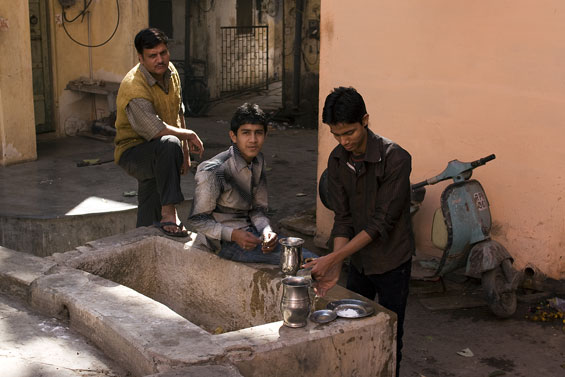 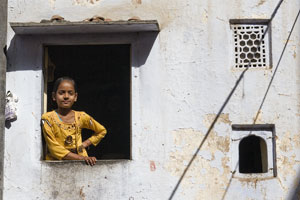 We reached the end of the backstreet, where we found ourselves staring at the pink walls surrounding the City Palace. Despite the shade in the terraced shop fronts, the day was hotting up. Traffic moved in all directions, like busy ants rushing to and from work. Cycle rickshaws crossed paths with pedestrians as buses, continuously honking their horns, forced carts and auto-rickshaws to dodge out the way. The noise, after the comparative calm of the tiny lanes, was cacophonous. 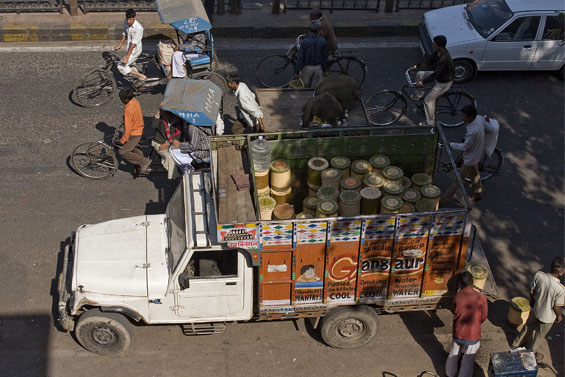 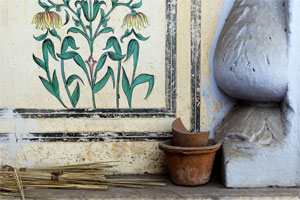 Before crossing the street to do the tourist thing, Liz and I got chatting to a rickshaw driver who spoke good English. He recommended that we turn around and climb a steep staircase which led up to a half-hidden Shiva Temple. Ascending the cranky old steps offered us immediate respite from the noise below. A local lad joined us, keen to show us around. We saw a basic courtyard with four walls decorated with old, faded paintings and a disused water feature in the middle. Small statues of Hindu gods lay in one corner, and there appeared to be some kind of residential area set back on two sides. Our guide, who claimed to be a Hindu worshipper, took us up another set of hidden steps at the rear, where we were able to walk round all four sides, looking down into the courtyard below.

We were now level with the old city walls and could see some of the City Palace. Liz chatted religion and culture to our guide as I went for a wee. Bizarrely I had found on the roof two urinals in between the temple and the next building. What more could I want from my Shiva Temple? An elevated urinal bringing me closer to God.

The best photos from our morning sojourn into Jaipur. Usual rules apply. Click on the slideshow to start and dare to go full-screen.

10 Comments on “Dusty Backstreets of Jaipur”

The eyes of a skipper who's just sailed through a

Prettiest boat in the marina? Trawler with sails.

Fifteen hours of lightning and squalls. After the

Liz explaining why she can't be arsed to tack. Mor