Herewith a list of the foolish people who dared come aboard Esper in 2007. It only ever ends in tears and a thumping headache.

Jayne, an old friend of Liz’s, was the first to visit and she came specifically for Liz’s birthday. The celebrations seemed to go on all week but this was Liz’s first visitor on board Esper and gave Liz some time to chill out with an old friend. Jayne came for a long weekend and we were joined by Meltem, an old friend of Liz’s who is considering semi-retirement aboard a boat she is yet to buy. It’ll happen though.

Next we were graced with the presence of my cousin, Jason, and fiancee Orla. In that week we clocked up 120nm and discovered some new places around the Goekeva Peninsula and rounded off the sail with a hack downwind in 30kn. We were fortunate enough to get back to the marina just before the storm really kicked in (gusting 50kn). It was my intention to ‘shit Jay up’ and I think I managed it just for a brief moment when we came off the wind and sent Esper bending over on her beam at a naughty angle!

Emma
Then it was carnage time as Emma, Liz’s old work colleague, joined us. We watched the sun come up six days in a row (as in didn’t get to sleep until 7am), laughed until we wet ourselves AND, most importantly, clocked up another 100 or so nautical miles. We also probably p!ssed a few people off along the way what with our tomfoolery, and it’s something Liz and I must learn to temper if we want to maintain a decent reputation. Not that we have one of those. Emma is very keen to pursue life on a boat so this was a great week of both tutoring and learning.

Emma will kill me for putting this shot in!

Taç and Idil
Whilst Emma was here we were joined by Taç (already familiar with Esper) and her friend Idil, both of whom were down from Istanbul for a week and both of whom decided to extend their stay so they could spend some more time aboard Esper. They got the bug too! 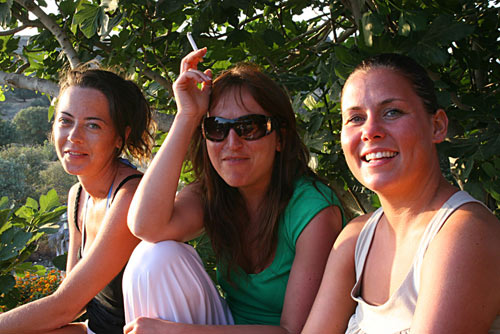 Yet another new friend introduced to us by our old friend Mark. Nate is working on the same boat refit that Mark is project managing and was over from the States for a few days to work on the audio/visual requirements of this huge, massive stink pot. Nate joined us in our trip over to Rhodes (see the log) and because he slept on the boat and because we got on so well with him and because he wanted to come sailing with us but didn’t have time, we decided to make him our first and only honorary crew member!

We met Kiwis Benn and Becks through Nate and hit it off straight away. A couple of evenings were spent with them before they made it out onto Esper. They are both employed on the same boat that Nate and Mark have been working on, with Benn as engineer and Becks as steward. They met in the NZ Navy and have travelled a fair bit but most importantly they are a couple of very decent people who know how to have fun. Our kind of people!