In 2008 Mohammed ‘Anni’ Nasheed became the first president of the Maldives through the first multi-party democratic election. After thirty years of dictatorship under Maumoon Gayoo, the country began a new age of progressive politics.

A graduate in Maritime Studies from Liverpool Polytechnic, Nasheed was considered by many to be the new hope for the Maldives; he represented a generation of Maldivians who wanted to fuse traditional Islamic principles with modern, western ideologies. Amongst other things this would allow young people to start their own businesses and open up tourism beyond the protected, privately-owned resort islands.

Sadly Nasheed’s short term in office was plagued by supporters of the old-guard, who, along with the backing of the military and the police, ousted him in 2012. The imprisonments he endured during his political career, before and after his presidency, have been shown to be politically motivated and unfounded. Despite Nasheed’s popularity amongst those looking to move away from the tyranny of Gayoom’s dictatorship, the old school still received support from businessmen, politicians and police with their own, as a friend put it, ‘vested interests’ in ensuring Nasheed never return to power. His liberal politics were slowly ending their grip on power in tourism, politics and the civil service.

While in India, we attempted to contact Mohamed of Antrac, a shipping agent who came recommended among a number of sailing websites. He responded to two emails over a six month period (excusing his lack of communication later by saying he ‘had problems with his email’). He appeared to have no interest in our business, so we abandoned plans to use him and contacted a number of other agents we plucked from the list on noonsite. We chose Seline. Once in the Maldives we heard from Mohamed, via another yachtie, that Muzhid of Seline would probably be arrested by the time we reached Male’, so perhaps we may wish to reconsider our choice of shipping agent and go elsewhere.

Our shipping agent, Muzhid Rasheed of Seline, is a young and ambitious man. A supporter of Nasheed, he is like many of the local people we met in the Maldives. A man of integrity, honesty and professionalism, he is in the vanguard of the new-school Maldivian outlook on life. He travelled to Male’ from his small island to become an employee of Antrac, where he gained a solid understanding and experience of the shipping industry. Then, like many of us, he left his employer to set up his own business. Courteous and polite, he responded to all our initial email enquiries within a few hours, picked up the phone whenever we called, and arrived at our meeting locations on time and prepared. 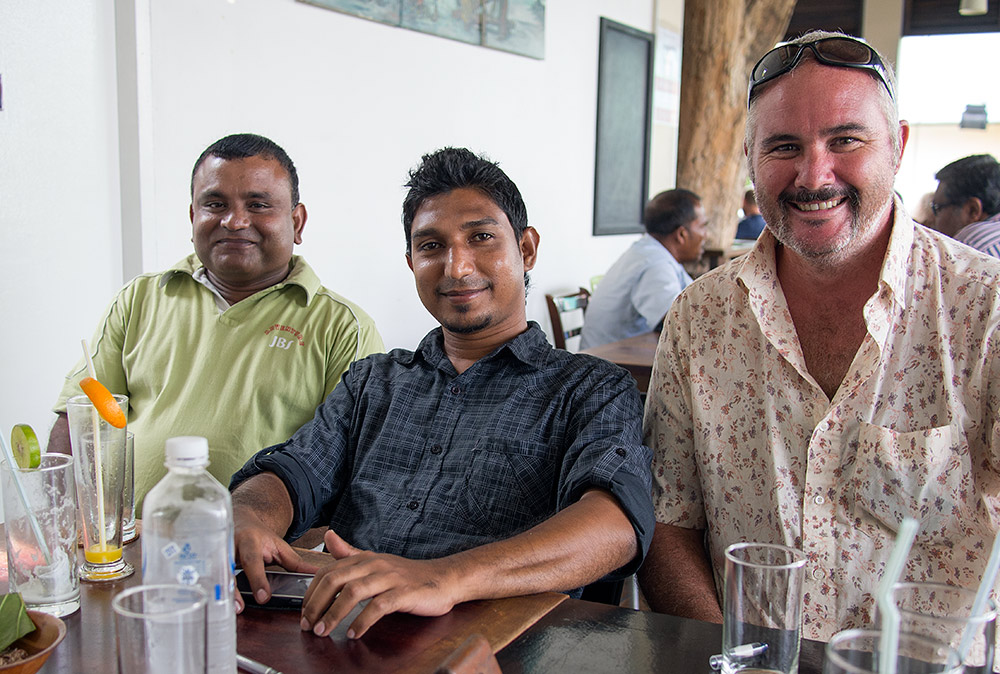 But this story is about checking out of the Maldives, a procedure that should have taken a couple of hours but ended up taking three days to complete. We checked out at the same time as our friends on another boat, who had chosen to go with Mohamed. They left on a Saturday, whilst we were delayed until the Monday. The problem centred around a ‘sanitation certificate’ that we were supposed to have been issued on arrival. Muzhid, who had dealt with many sailing yachts before us, was confused. Why did we need this certificate? In his experience it is usually only required by commercial ships. He was told that new rules had been introduced since our arrival, and as we hadn’t been issued with one on would have to acquire one before we could be issued with port clearance. We contacted our friends and they confirmed that they too did not have a sanitation certificate. And yet they were processed and checked out by lunchtime.

It was evident that Muzhid was being given the run-around. Various officials in the port authority offices who were dealing with our paper-work appeared to be time-wasting and delaying our departure. Paperwork from one department was taking a whole morning to complete, was being issued after 2.30pm when the next office in the procedure had closed for the afternoon. The next morning the reverse happened. Payment for the sanitation certificate was made at the Government Finance Office but was not processed until after 2.30pm when the relevant office issuing the final document had closed.

I Can Smell A Rat

After the second day I began to smell a rat. Our friends had already departed by this point, still without any sanitation certificate. I took Muzhid to one side and asked him straight: did our delay have anything to do with Antrac? Up to this point he had not mentioned he was having any problems with his previous employer, but finally he told us: “Yes, since I left to set up my own company they have tried to put me out of business. They use their contacts in the port authority to make life difficult for me; I have over fifty clients and they have systematically emailed each client, using three different business addresses, to tell them I am a bad person, that I will steal from them”.
“So you’re not about to be arrested then?” I asked, knowing the answer.
“Of course not. That is another rumour they have been stirring up”.

Fortunately for Muzhid his clients have seen through these unprofessional messages and continue to forward emails to him as evidence. We now have some of those emails in our possession. They read like they were worded by an eight year old and make some pretty nasty personal claims against Muzhid and his business.

“My commercial clients are professional people who can see the emails are spiteful. They forward them to me, with a covering note saying they are happy with Seline’s services.”

One email, addressed to the CEO of a shipping agency, warns that Muzhid is a bad man and will steal everything from the boat. The CEO has since replied to the agency, and has reported the libel to the authorities. Here’s an example:

“Dear Rasheed [Muzhid] …I have contacted Antrac to inform them that I will not tolerate this type of behaviour and to stop this immediately. I wrote the letter and forwarded it to the Ministry of Defence and National Security.”

Since our departure I have contacted Mohamed at Antrac and asked him why he has sent these accusatory emails. His response is interesting:

“There are number of paper agencies registered in the Maldives, they just names or single hands with worry about the problems may face by the authorities or clients interests and work towards the right way. They are not bothered anything after got the asking fee… Of cause they [Seline] are thieves/robberies as no doubt, you see the current fraud they have for the port health official document, they have forge the document and charged more from the yacht after said that was the amount paid for the port health authority.”

I didn’t understand what he meant and his response was confusing, so I went back to him and asked him outright: what evidence do you have of Seline ‘stealing from people’s boats’?

“If I explain you hundred times I understand you will come with the same questions, even an idiot can understand what I have said.”

I still didn’t understand because he hadn’t provided any evidence to support his claims. I asked Mohamed three times: do you have evidence of your claim that Muzhid ‘steals from your boat’? Each response was defensive and eventually abusive.

“Even idiots also can understand what we have explained but still you are coming with same question. From the below we understand you don’t want to hear us.”

Well I do want to hear from you! I want to hear the evidence that supports the claim that Seline steals from people’s boats. Alas, I wasn’t going to get anywhere with Antrac who failed to substantiate the claims it had been making, so I asked Muzhid instead. He explained that since setting up Seline a number of clients had moved their business from Antrac to Seline. Their reasons? Professionalism, efficiency and honesty. Seline also offers a more competitive price.

Clearly Antrac does not realise its tactics are backfiring. The libellous emails demonstrate its un-professionalism, and its lies are now being reported back to the authorities by the very clients it is seeking to impress. Also, there is a moral implication of spreading these unsavoury rumours to its own clients, who are used as innocent tools to spread the lies. Trying to get to the bottom of these accusations by approaching Antrac yielded nothing but abuse.

As one of Muzhid’s commercial clients states, this simply boils down to jealousy. Like myself, Muzhid left his employer to start his own business. The difference is that my employer welcomed my new venture and was happy to use my services, my employer became my client and a mutually beneficial business relationship developed. It must have been a blow to his agency when Muzhid told them he was leaving to set up on his own, but rather than working with him – perhaps in partnership or as a possible outsource – they have resorted to the kind of bullying tactics that would have them in court in many countries.

For me Muzhid represents the new-school Maldivian, an educated lad who sees opportunity in a free market. His ideas and ambition go beyond his shipping agency too; he told us in great detail about his plans to set up the family home as a guest house, something that many young people we met were planning to do. Sadly the old-school are still very much in power. Businesses and businessmen with vested interests will do anything to make sure people like Muzhid cannot compete fairly. Using contacts in government departments they conspire to make it difficult for the new man.

I want nothing to do with a company that behaves in this way. In a fair economy, any company that pulls strings in this manner shouldn’t be allowed to operate, but until democracy prevails in the Maldives they will probably continue to behave in this unprofessional way. All we can do is remind people that businesses like this still operate and should be avoided. My wish, along with Nasheed being re-elected, is that the old-school corruption is flushed out, and that young people like Muzhid, who represent a brighter, fairer future for the Maldives, triumph.

We got our sanitation certificate in the end, by the way. And stamped across the page in large blue letters, as if to take the mick one last time, were the words EXEMPT!

Note: it is a legal requirement in the Maldives for all ships, including small private yachts, to check in and out through an agent. Despite Antrac telling us that there are very few legitimate shipping agencies in the Maldives you’ll find a number of them listed in Noonsite and other websites. They all operate perfectly legally, albeit in direct competition with Antrac, and often at a more competitive rate. Shop around.

4 Comments on “Corruption Among Agents In The Maldives”

The elusive and endangered pygmy elephants of Saba

Where's the weirdest place you've ever been up the

Meet "Jack" from Kampong Sukau. He hangs around th

Been in Borneo for a year and finally got to meet

If you're sailing through #pirates to Turtle islan

Corruption Among Agents In The Maldives | followtheboat
7ads6x98y
We make weekly videos!