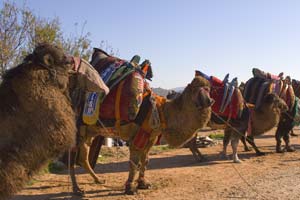 Scary things, and they spit

Of course it’s not all boats, boats, boats. Please shoot me if ever I bore you with fantastic tales of really interesting boat maintenance. I’ve met these types before, people who talk about nothing else but boats. They’re interesting for the first five minutes and full of useful information but after 2 hours…yawn…

So having Semih and Barbarah to hang out with is always good fun. They called in on us one Sunday morning and took us to see some camel wrestling! Having never seen this before I think Liz and I were expecting a WWF style wrestling ring with Giant Haystacks taking on a camel. Of course it’s not like that at all, it’s two camels battling it out. And before I get pulled up on it, they were actually dromedaries, but Dromedary Wrestling is a bit of a mouthful. 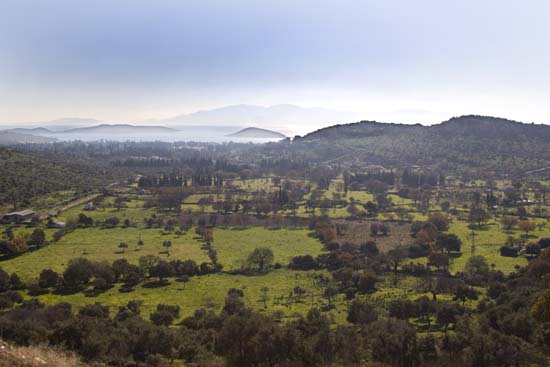 View from the arena looking out across towards Kos

The venue was a purpose built dusty arena on top of a hill somewhere outside of Bodrum. The views across the Aegean added drama to the location and despite it being a chilly January day the sun cast a bright hue across a cloudless sky. The sound of hundreds of camels adorned in bells clanking up the hill could be heard a mile away and as we approached the venue we had to weave our way through a forest of dribbling and angry looking ungulates.

Being virgin camel wrestling audience participators we didn’t come prepared, for in the venue were hundreds of Turks with their own picnic tables, BBQs, packed lunches and crates of drink. It turns out Camel Wrestling is taken very seriously here and a whole day is made of it. Apparently there is serious betting involved too. Still, we wandered around the edge of the arena and stayed for a couple of hours watching the camels beat the crap out of each other. The camels are dressed in long silk shorts and the owners have to put boxing style gloves on their hooves in order for them to enter the ring after the seconds have been called. Of course that is a complete lie but I had to dress the facts up a bit. The truth is camel wrestling is an interesting novelty but it’s a little boring after a while. The camels lock necks and it’s all about which camel pushes the other to the floor. I’m guessing this is what they do in the wild when fighting for a mate so I didn’t feel too bad about their treatment. It was more fun, however, when a rogue camel would break free from its owner and bum rush the crowd. You’ve never seen so many Turks run in terror and collectively crap their pants.