Introduction to our return, by Jamie 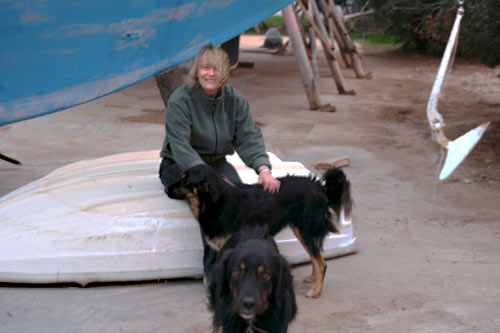 It was all a bit of an anti-climax when we returned to Esper. I mean we’d spent over a year away from her, renovating our flat in London. We’d been getting our hands dirty and sampling the world of DIYing and landlording so when we finally returned to Turkey to start realising our dream it all came as a bit of a shock. I guess it was our bodies in melt-down, our minds allowing us the first bit of respite after working hard and fretting about getting people in to rent the place. Financially we’d reached the end of the tether – another week and we’d have gone into the red – so we needed to find tenants in order for us to start our adventure. Failure to do so would have meant another miserable Christmas looking down the end of a beer glass in a smoky market town pub, far away from the delights of the sea.

I’m happy to report we celebrated Christmas with a pizza in Sunger, our fave restaurant in Bodrum, accompanied by a cheap snowman candle and a motley crew of sailors. So yes, fortunately for us we found our tenants and within two weeks of getting them settled in to the flat we took a flight direct to Bodrum and headed on over to the boat yard in Icmeler.

Tucked away under an olive tree in a dark corner of the yard, looking forlorn and grubby was Esper. Just to cast eyes on her again after so long brought a warm glow to our stomachs, despite the howling cold northerlies. The wind in our first few weeks on the boat in the yard was horrendous! Despite having spent some time on a boat up on sticks I don’t think I’ll ever get used to the boat wobbling as the wind reaches gale-force speeds. I often wonder where the best place would be on a boat if it got blown over in a yard. It’s definitely the lazarette.

Esper was exactly as I’d left her, though she had sprung a couple of minor deck leaks and developed some warped veneer. Still, if your mates had left you in a corner somewhere for a year I’m sure you’d have sprouted a beard and wet your pants a few times. It’s the same with boats – a year of total abandonment is a long time for them. Esper was covered in a layer of Saharan sand, olive branches, bird poo and other unidentifiable bits of crap….no, wait a minute, that’s the boom……