Bullet holes in a building in Ledra Street

Next we zoomed off, through the endless buffer zone, with its burnt-out shells of cars, visible through the wire, and found ourselves in Lefkosa, on the south side. Here it is possible to walk through to the north along Ledra Street, formerly named “The Murder Mile” by the British, now a checkpoint that was opened earlier this year.

Contrasts again. The richly self-indulgent road south of the line turns into a dusty careworn main road on the Turkish Cypriot side. No Starbucks, Top Shop or McDonalds to be found here. Stepping off the main drag we are in a monstrous slum of poverty and wasteland. Glance through a doorway (no door) to see an unlit crumbling staircase in what can only be a derelict building, but shock seeps through as you look up and see an ancient head-scarfed woman looking vacantly out of an unglazed window. Young men sit together in unidentifiable grey clothes, watching you as you pass. A “merhaba” from Jamie is rewarded with smiles all round and a return greeting. Tiny girls, running wild in their brightly coloured clothes, shout “Hello! Hello! Hello!” as we pass, shrieking with laughter at our enthusiastic replies in Turkish. Later their bright-eyed, white-toothed father tenderly collects them and flashes a glorious smile at us. Living in poverty and at the mercy of a world that has abandoned them, my throat catches at the cheerful welcome we receive from these people. 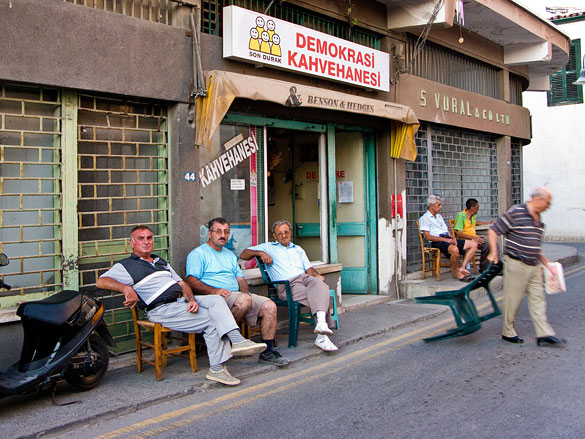 Gentlemen of Leisure, Lefkosia. Jamie: Funny how a camera can lie. In the above text Liz alludes to the happy, welcoming people of northern Lefkosia, yet this image appears to contradict that view. In fact as we turned the street corner to meet these men relaxing, we were again greeted with 'merhaba' (hello) and smiles. I asked these guys if I could take a picture of them and they happily obliged. And yet when that shutter opened for a split second... 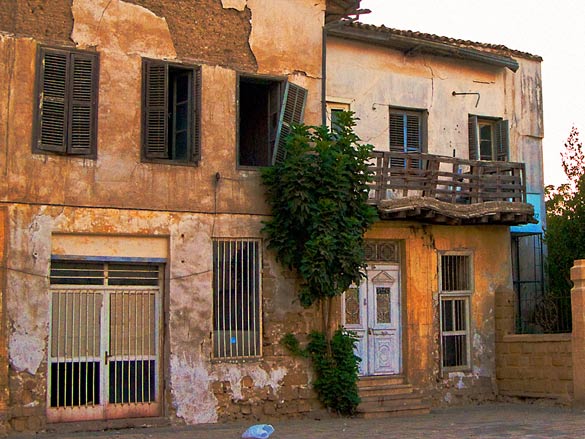 With no money to invest there are many buildings like this on the north side of the capital. And this is in better condition than some of the inhabited buildings. 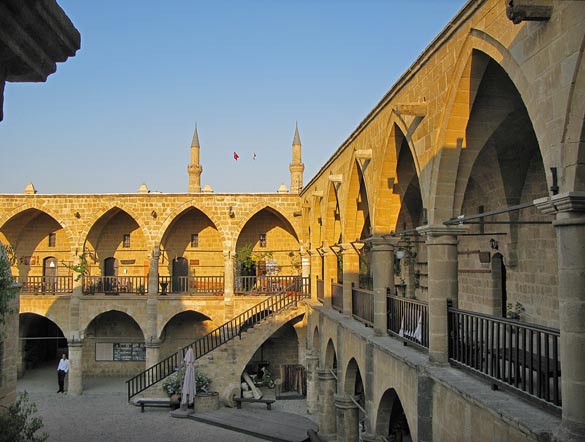 We continued further into the comparatively affluent part of the city and headed towards the beautiful Büyük Han (The Great Inn) for a spot of history and culture. It’s another gorgeous ancient building that is really worth seeing, somewhat reminiscent of the prettying up of Covent Garden in London, but genuine nonetheless. Beautifully presented, the once ancient caravan stopover is now a well restored arts and cultural centre; an oasis of calm in the hustle and bustle that surrounds it. Nearby is the smaller, Kumarcilar Han, sadly neglected and closed up. One day, hopefully, there will be the money to see it restored to its former glory.

One day, hopefully, the people of Northern Cyprus will be welcomed back by the world.