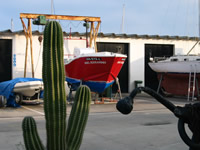 After a number of calls to Kevin the skipper we arranged to meet at Heathrow at some ungodly hour in the morning. It felt like one of us should have been wearing a carnation in our jacket, as though we were on a blind date. I’d never met Kevin before but we had been thrown together by Professional Yacht Deliveries to help deliver a Malo 36 from Portugal to Dartmouth, UK. If this were to be a meaningful relationship then it was to be a threesome since we were also waiting upon Lee, who turned up at the departure gate at the last minute.

When we arrived at the marina we were directed to the boat yard to find Mayfly up on sticks. Lee and I made ourselves busy fixing anodes and other minor jobs whilst Kevin went off to find Peter, the owner. We all met up later on in the afternoon over lunch where upon Kevin discussed the deal with Mayfly whilst in the water. Peter was happy to let Kevin take full control of the boat , which I suppose was why he had employed him in the first place! 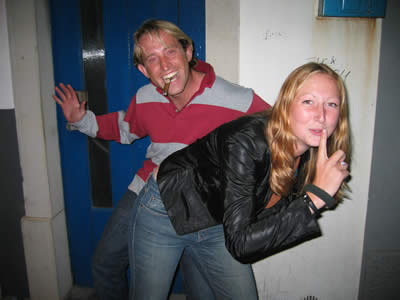 Lee makes the local girls aware of his presence

Lee and I got better acquainted over rather a lot of alcohol, which saw us smoking cigars and flirting with the Eastern European girls working the clubs in Lagos. I mean that in an innocent way, but I woke up next morning to find rather a lot of pictures of Lee in some compromising poses!