A week in a boat yard is never much fun, and after hauling Esper our misery was compounded by the discovery of some serious osmosis (water ingress). The joy of sailing the idyllic Maldives went out the window, at least for a few hours, as we inspected the water blisters covering many parts of the hull. Experts reassure us that osmosis isn’t as bad as people believe, but when you see the pictures of our rudder you might think twice before agreeing with them. (Click on any of the images to view full-screen, close-ups.)

The haul out itself was fun. Entry into Gulf Craft boatyard was easy and we stayed on the boat as she was lifted by the huge 150 ton crane, operated by a young Tamil using a remote control not too dissimilar to a remote control for a toy car or plane.

One man and his toy

It was a bit frustrating not being able to be on the ground inspecting the manoeuvre, but we made the most of the views as Esper went on a little tour of the yard.

Millie getting the lay of the land

Esper ‘safely’ stacked up on some crates, it didn’t take Millie long to negotiate the large wooden ladder and as she scampered off under a pile of fibreglass, Liz and I examined the hull. The closer we looked, the more blisters we discovered. 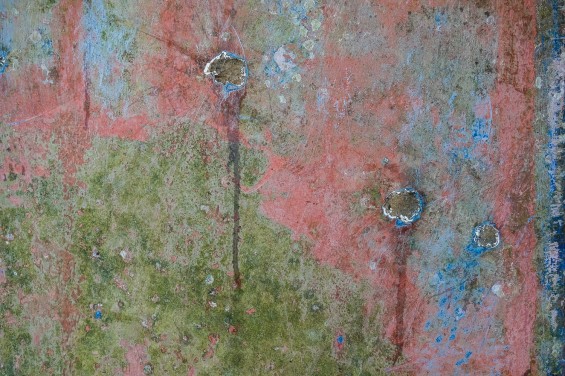 Bubbles to the right

Osmosis is exactly that, a water blister where water is trapped inside the gelcoat. You can leave osmosis for years without any damage, but if left untreated it will eventually get the better of the glass fibre as the water seeps in and spreads.

The rudder appeared to be the most damaged. Back in Turkey when we first bought the boat we got an extra layer of epoxy painted onto the hull to strengthen it, but it seems they forgot to do the rudder. The blisters on the hull weren’t as bad as the rudder, where the water ingress had got right through to the fibreglass. Parts were ‘soggy’.

Although we lost our anodes 2 years ago, there was no evidence of electrolysis on the prop. We still had some pitting, however, but this was down to those bloody barnacles! If you look closely you can see the pitting where the barnacles had glued themselves to the prop. I’ve never seen anything like this before. Very odd.

Although Gulf Craft specialises in building fibreglass boats, we’re not in a position to get the osmosis treated right now, so we’re saving that job for South Africa. I’ll attempt to repair the rudder, grinding out the patches and filling them with something that’ll see us right for the next six months.

At least the jet spray was thorough. In other boat yards the operator gives the boat a quick blast, but our man (another Indian) must have spent close to two hours demolishing Esper’s green beard and helping to remove old anti-foul.

Having spent the first morning sanding one side of Esper (a job I loathe and one that my body will be very unhappy about for the next few days) we’ve broken the back of the work. We intend to spend no longer than we have to here. Hot, dusty and full of flies (we’re on Rubbish Island, where garbage pyres burn throughout the night), it’s the downside to boat-ownership, especially when you know that, sometime in the near future, we have a very big job to do on the hull.

Still, at least Esper’s growth wasn’t as bad as this wooden boat!

5 Comments on “A Bad Case Of The Pox”

Link in profile. If you think sailing round the wo

A Bad Case Of The Pox | followtheboat
7ads6x98y
We make weekly videos!