The experts will tell you there are three kinds of island in The Maldives: inhabited, uninhabited and resort. We’ve just spent six days on a fourth kind, one for which a label has yet to be invented.

The Maldives comprises around 1200 islands. I say “around” because each source I have checked comes up with a different figure, and I can’t be arsed to count them all on our navigation charts (which, in any case, aren’t that accurate). They stretch from 7º N (roughly on the same latitude as the southern tip of Sri Lanka) to 0º 41′ S (just south of the equator). That’s thousands of nautical miles of sailing around “sun-kissed”, “palm-fringed” little pieces of paradise. But more on that another time.

Jamie hard at it

Thilafushi was originally a sandbank, so not classed as an island. A few years ago it may well have been a destination for the well-heeled lover to impress his current amour with a spot of secluded silver service dinner as the sun went down (these days you can’t take a dip or stroll at dusk without a butler thrusting his canapés at you). But now, the Mordor-like flames and black smoke would put you off your appetiser. For Thilafushi is commonly known as “Rubbish Island”. If you saw the BBC Simon Reeve documentary, you’ll have an inkling of what I’m talking about.

It cannot be classed as an inhabited island because no Maldivian lives there. But with plenty of foreign workers (south Indians, Sri Lankans and Bangladeshis) housed in multi-storey concrete dorms, and really stupid twits who thought that hauling out their yacht in the Maldives might be a good idea, it is full to brimming with people. It doesn’t count as uninhabited for the same reasons. And it’s as about as far removed from a resort as you are likely to get.

No longer a lily-white sandbank, Thilafushi has been reclaimed and bulldozed into an industrial and waste disposal island. It bubbles and boils throughout the day and night, belching and farting the excreta and detritus of neighbouring Male’ and surrounding islands. Shaped like an elongated horseshoe, there is a dredged channel which allows vessels into its “lagoon”. On one side is a commercial strip, containing boat yards, warehouses and myriad service centres. The waste area, with Sauron’s unblinking fiery eye dominating the scene, sits opposite.

“This isn’t as bad as I expected,” I said to Jamie, as we sat on Esper in the slipway, waiting to be hauled out.

He didn’t bother to reply. We were coming to a rolling boil in the midday heat, and any attempt at conversation or movement was painful. Millie lay on the floor in the saloon with ears twitching. She began to pant and stared up at me through the hatch. What hell-hole have you brought me to now? she seemed to be saying. 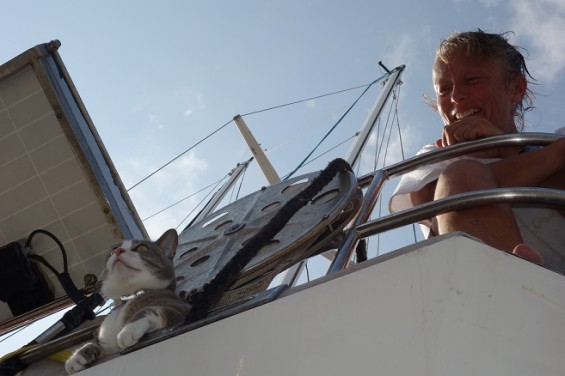 “What fresh hell is this?”

After being carried by crane from the water to our new home on the hard-standing, Jamie and I negotiated a home-made wooden ladder, straight out of a Tim Burton horror animation, down to terra firma. We hadn’t seen the complete underside of Esper for four years.

“Well, that serves us right for not hauling out for so long,” Jamie finally spoke. “We’ve got osmosis all over the hull.”

The term “osmosis” is one which strikes fear and dollar-signs-with-lots-of-noughts into the hearts of all yacht owners. Your boat won’t sink when the blisters appear, but it is a protracted and expensive process to fix the problem. Many cruisers sail for years, grinding, sanding and filling every time they haul out. So it seems we will be joining their ranks until we can rustle up the dosh for long-term repairs.

I felt like sobbing, but was so dehydrated the tears wouldn’t flow; sweat ran down my face in their place. And my neck, back, front, arms, legs, toenails and everywhere you’d care to imagine.

“Oh well, we’ll sand and patch till we get to Richard’s Bay or Durban at the end of the year,” I suggested.

“Yeah,” said my fatalistic partner, “sounds like a plan.”

We began scraping the barnacles from the hull. Taking pity on us, or perhaps bemused by the presence of a partially naked woman in the boatyard (I was in long shorts and a T Shirt, pretty risqué for these parts), workers on other boats came to admire our handiwork, and to chat to us.

“How long in Maldives?”

It was very nice of them to take an interest and all that, but the wilting heat meant I could only manage one function at a time, and conversation was beyond me. Jamie valiantly answered their questions and was rewarded with offers of help and the use of their power tools.

The days quickly fell into a pattern, dictated by the temperature. Up at six, with only a coffee for breakfast (neither of us could face the effort of chewing solids), we spent the next six hours of hard labour in, on, under and around the boat. At noon the whole yard shut up shop for a two hour lunch break. Not even those born to these climes attempt to do any work in the middle of the day. Then back to work until the sun fell out of the sky, as it does in the tropics, at 6pm. A shower was followed by a cool 28º evening in the cockpit recovering with an alcoholic refresher.

The good news was there was no sign of rats or cockroaches (a healthy community of cats saw to that), but the bad news was that another healthy community, this time of flying insects, played tag in and around the boat for 24 hours a day, every day. At dawn, the flies appeared, infiltrating every nook and cranny on the boat and ourselves. They were impervious to the sprays I had brought from India and in the local shops. At dusk (and during the day in the shadows under Esper) the mosquitoes came to feast. We lit coils and slavered on the anti-mozzie cream, but the coils just made the place smell nice and the cream slid off our sweaty skin. So we covered up with long trousers and long-sleeved tops. And sweated more. At night, even with two fans on full blast in the cabin, midges munched on our bodies. So we covered ourselves with sheets (pyjamas were out of the question in the heat) and carried on sweating. In the morning it would start all over again as the flies joined us for our morning coffee.

Even Millie couldn’t be bothered to move much, despite the enticing calls of the boatyard cats. A few small forays at night were all she managed before realising it was just crap out there. She spent most of her time asleep under the saloon table in the shade; I wished I could have joined her.

When you stay on your boat on the hard-standing, you can’t use your loo (unless you want to fill up your holding tank, which is a pretty hideous thought). So, no matter what the time of day or night, you have to get dressed, negotiate the ladder-from-hell in the dark, cross the yard and use whatever facilities are on offer. In the Med we’ve had 5 star shower blocks which have been scented, offered hot and cold water, complimentary hair dryers, shampoo and soap, and have maintained lavatories so clean you could eat your soup out of them. On Thilafushi, we shared the office staff’s one loo. The walls and floor were covered in white tiles which offered thought-provoking Rorshach stains on every surface. It was basic, but it worked: the loo flushed, the hose for washing your bum was so fierce it took off the top layer of skin if you directed it the wrong way, and the shower spray was powerful and plentiful. There was no hot water, but who needed it? Several times during the day, Jamie and I stood fully clothed under that shower just to wash the filth, sweat and heat from our clothes and bodies. In the evenings we gloried in the shower waterfall, letting it exfoliate our insect wounds and ladder-scraped shins. Bliss. We never had to worry about traipsing across the yard for a pee in the middle of the night after all, because any excess water in our bodies exited through our pores.

The heat was a hunger suppressant, but we managed one cooked meal a day in the workers’ canteen next door. It offered south Indian dishes set out buffet-style on a check table-cloth, beneath a group of plastic penguins. We never asked about the penguins because we were too busy heaping the Keralan fish curry (made with limes, coconut and curry leaves, our favourite dish in Cochin) onto our plates. Each day, once we started eating, we realised how hungry we were. That chef deserves a Michelin star.

The other thing which kept me going, and allowed the sweat to run smoothly, was the copious amounts of cok I had. Yes, “100% cok” (juice to you and me) mixed with soda water during the day, and enlivened with a shot of vodka or rum under darkness, is just about the best way to survive the hot and hellish island of Thilafushi.

Note: We stayed at Gulf Craft boatyard. The service was professional, friendly and faultless. We couldn’t have asked for a better team to help us. Thanks guys!

2 Comments on “100% cok: how to survive on Thilafushi Island”

Found this little fella goofing in the anemones on

Load More…
This error message is only visible to WordPress admins

100% cok: how to survive on Thilafushi Island | followtheboat
7ads6x98y
We make weekly videos!